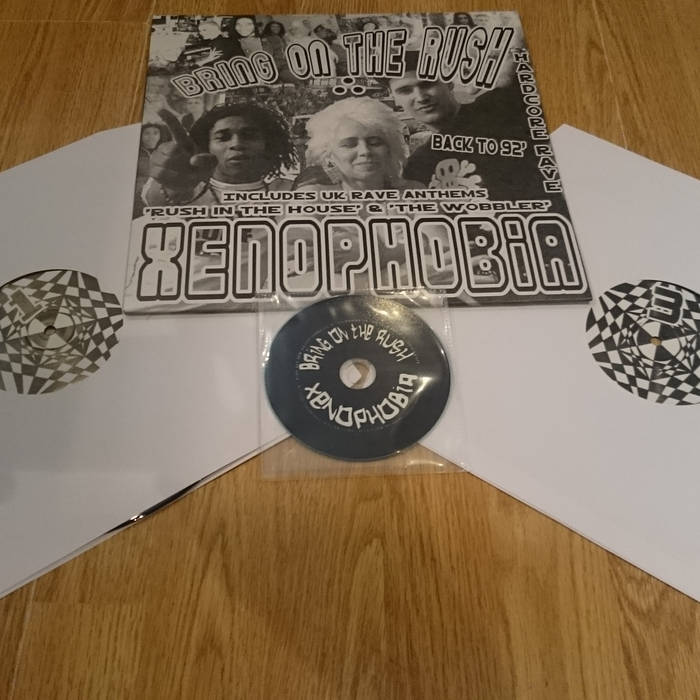 *NO CD WITH ALBUM*

Xenophobia is Sid Truelove (DJ Terminator) and Zillah Minx (The Acid
Queen), founding mainstays of the groundbreaking Anarcho Punk group Rubella Ballet, augmented by the singular talents of Bert Fuzz (MC Skallywag from Spiral Tribe). They were among the first to turn on and tune into the early nineties’ rave scene, Sid’s interest growing out of his long-standing fascination with acid house and its associated pirate radio underground network.
Already established as an innovative compositional talent thanks to his work with Rubella Ballet, Sid resolved to extend his exploration of the new sonic horizons of the times by investing every penny he had into the era’s key electronic equipment; an Atari computer running Cubase a program for sequencing, and a Yamaha SY77 digital workstation and a four-track Tascam Portastudio for recording vocals.
Armed with this new technology, Sid set about creating his own style of Rave music with the sweetly mesmeric sound of Zillah’s angelic vocals, enhanced by Skallywag’s unique MC-ing, which imparted the new songs with a tangible sense of being at an actual rave.
Hypo Psycho was Xenophobia’s first release with a 4 track 12” EP being issued in late 1991 on Xeno Recordings (XENO1T)
Track 3 from the Hypo Psycho EP, ‘Encounter’ was also included on the Theory Records Beyond the Threshold compilation in late 1991 (TR101LP) Into Combat was Xenophobia’s second vinyl offering, a 4 track 12” EP issued in early 1992 on XENO Recordings (XENO23T)
Xenophobia made numerous special guest PA’s with Spiral Tribe at illegal underground events in London and further afield around the M25, moving as fast as the scene itself to stay one step ahead of the Old Bill’s pernicious attentions.
The most famous of these was at Castlemorton in Worcestershire where 65,000 ravers congregated by word of mouth alone to spontaneously combust into the biggest guerilla party in Europe.
At the time of the event, Spiral Tribe were tapping into the zeitgeist’s mainline, their recently released eponymous debut EP ‘Breach of the Peace’ featured Xenophobia's monster track ‘Doet’ that included the compelling lyric ‘Rush your f**kin’ bollocks off’.
Xenophobia’s next release was set to be ‘The Wobbler’ on Kickin Records.
However, the label had other ideas; pulling the single and subsequently installing the track as a B-side to ‘Rushing the House’ in May 1992. The lead track again captured the context of the era, being capped by the line “Ecstasy, it really gets me going / Gets me so I don’t know what I’m doin’”.
‘Rushing the House’ stormed straight in at Number 20 in the National Dance chart, Released at the height of the pirate radio days it was getting played on every station, seven days a week.
Telstar snapped up ‘Rushing the House’ and released it on Rave Generator a CD compilation that also featured the Prodigy, Acen, Altern 8, Messiah, Utah Saints and many more.
Sid recalls a phone call from Skallywag with directions to Castlemorten a free rave initiated by Spiral Tribe. The event provided him with the perfect opportunity to hand out a shed load of white labels to DJs at all the rigs. He remembers being with Zillah Minx and Scallywag, walking into one of the biggest tents whereupon
the DJ spotted them and immediately killed the tune he was playing and slammed on a white label of ‘Rushing the House’- The place exploded – everyone knew the words, as by now as it was on constant rotation across the pirate radio underground.
Its pivotal lyric, ‘Go to the flow with an E rush me, oo rush me, ee rush me’ was on the lips of nearly every raver on the scene and is still as infectious today as it was 23 years ago.
Big shout out to Spiral Tribe, Bedlam and many more underground systems, coz the music scene in the UK would not be the same without the sacrifices some of you made for the cause. The introduction of the Criminal Justice Bill made Castlemorten the last quality free rave of the year and put an end to Raves’ as we
knew them. 1992 was the summer we will all remember as when the Government put a stop to everyone enjoying them self by enforcing draconian laws on innocent party goers.
Mid 1992 saw Xenophobia perform as headline act at ‘Rave World’, sending the packed, 5000 capacity, venue into a frenzy with their smash hit ‘Rush in the House’ and ‘The Wobbler’. Rare footage from the night has been edited together for the first time in 20 years and is now available to watch on You Tube.
www.youtube.com/watch?v=Gu72tlFKGCI (Rush in the House)
www.youtube.com/watch?v=K63TNFnXD7o (The Wobbler)
Touchdown 95.2 FM was one of the leading lights amid the pulsing galaxy of hardcore radio stations in London. DJ Nut Nut gave the band their Xenophobia in Da House show. Broadcast live every week, it spun some of the best underground hardcore anthems as well as their own, breaking all the DTI regulations on
broadcasting etiquette f’ing and blinding all over the airwaves as if you were actually at a rave.
‘Rush in the House’ has been played year after year on pirate radio and more recently on BBC Radio. 23 years on from its original release, this enduring interest has encouraged Sid to compile a double album of hardcore hits titled Bring on the Rush, featuring original nineties hardcore rave anthems ‘Rush in the House’ and ‘The Wobbler’, plus 14 more hardcore tracks written in 1992 at the peak of the underground hardcore explosion.

Bandcamp Daily  your guide to the world of Bandcamp